Dr. Barbara Sharief first began her public service career in 2009 when she served as Miramar City Commissioner and Vice Mayor. In 2010, she was elected to serve the people of District 8 on the Broward County Commission. Throughout her time as County Commissioner, Dr. Sharief has been honored to represent the people of District 8, advocating for affordable healthcare, stronger gun safety measures, mortgage and foreclosure relief, finding solutions for homelessness, promoting tourism, neighborhood revitalization, promoting and creating jobs, education and quality care for the elderly, veterans, and children, and for entrepreneurial/small business assistance and mentoring programs.

During her tenure on the County Commission, Dr. Sharief was twice chosen in 2014 and 2016 as Broward County Mayor, becoming the first African-American female, and the first person to serve twice in that role in its 100-year history. As County Mayor, she led the response to the tragic deadly shooting at Ft. Lauderdale International Airport, and helped the people of Broward recover after the destruction caused by Hurricane Irma. She also served on the board for the Florida Association of Counties (FAC) and advocated for all 67 counties in Florida as the first African-American female FAC President.

In addition to her many years of public service, Dr. Sharief is a mother of three, a certified medical professional with 25+ years of experience treating medically complex children and adults, an author, and an entrepreneur, founding South Florida Pediatric Homecare, Inc. in 2001.

To recognize her for her achievements, accomplishments, and dedication to serving the people of Broward County, The Broward County Commission declared December 14, 2021 to be Dr. Barbara Sharief Appreciation Day.

Giving her farewell speech in her final County Commission meeting, Dr. Sharief stated, “It’s not often that you find a job or career that is so fulfilling it saddens you to leave it. But looking forward and appreciating the past makes that fulfillment that much greater. It saddens me to leave my county family, but I am excited about what my future holds.”

Sign up for our newsletter & stay up to date on all new events and occurrences: 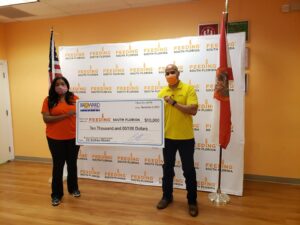