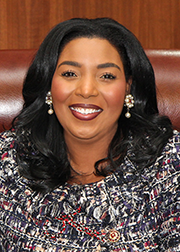 Born and raised in South Florida, Dr. Sharief loves to serve her community, speak up for those who don’t have a voice, and is passionate about leading Florida into the future.

At a young age, Sharief lost her father to gun violence. A small business owner who was well known in his community for helping those in need, he was shot and killed by a teenage robber. To help her family cover expenses, then 14 year old Barbara went to work. This experience and her father’s example instilled in her a strong work ethic and a drive to help others any way she could.

In this spirit, she chose to go into the field of nursing after graduating high school. Now a certified medical professional with 25+ years of medical experience, Sharief holds multiple degrees in Nursing, including a Bachelor of Science in Nursing (BSN), Master of Science in Nursing (MSN), and a Doctor of Nursing Practice (DNP). She is also a certified Advanced Registered Nurse Practitioner (APRN). In 2001, she founded South Florida Pediatric Homecare, Inc., South Florida’s premier homecare agency for children and adults with medically complex needs.

In 2009, after active involvement in her community as a business owner and parent, Dr. Barbara Sharief was spurred on to do something more. She ran and was elected to the Miramar City Commission. She later became Miramar’s Vice Mayor and was elected to the Broward County Commission representing District 8. In 2014, she broke barriers when she was appointed as the first African-American Mayor of Broward County, and was honored to be re-appointed in 2016. She was also the first black female President of the Florida Association of Counties, where she advocated for all 67 counties in Florida.

During her tenure as Broward County Mayor, Barbara Sharief fought for affordable healthcare, mortgage and foreclosure relief, solutions for homelessness, and for entrepreneurial/small business assistance and mentoring programs. In 2017, during her second term, two tragedies struck the people of Broward County. As County Mayor, Dr. Sharief led the response to the horrendous shooting at Ft. Lauderdale International Airport and oversaw the recovery effort after the destruction of Hurricane Irma. As a result, she created a stronger and safer community for years to come.

As the mother of three children, everything Barbara Sharief has done has been aimed at building a better and brighter future for South Floridians. Throughout her years of public service, she has demonstrated this commitment time and time again through initiatives such as generating a projected $130 billion for transportation and infrastructure improvement projects over a 30-year period in Broward County, and leading the passing of the Broward County transportation surtax initiative. She also serves as Chair on the Opioid Lawsuit Task Force, is a member of the Pompano Beach Community Advisory Board, and has been on the Broward Metropolitan Transportation Committee for the last 13 years.

Dr. Sharief continues to advocate for economic stability through job creation, small business support, affordable healthcare, tourism, neighborhood revitalization, education, and quality care for the elderly, veterans, children, and gun safety regulation. She is one of the featured authors in the August 2021 book, No Glory Without a Story, an inspirational collection of stories and lessons learned by entrepreneurs and leaders in their field about the trials, tribulations, sacrifices, and successes of owning your own business.

As County Commissioner, Barbara has focused on numerous issues including:

Some of Barbara’s accomplishments include: